2018 marks the fifth year of Budding Creativity and a change in the project format. This year we asked the primary and secondary students to produce short stories, poems and murals inspired by the theme of GOLD, chosen to reflect the 50th Nadfas anniversary.

I am delighted to report that the schools have risen to this challenge magnificently and we have nearly 100 short stories and poems with golden themes. The students have taken inspiration from gold hidden near the Old Wych Way on Dartmoor, lost treasure in the sea and strange adventures in the Amazonian rainforest. We have Golden Lion Tamarins, a golden frog, a golden chicken, a golden volcano and a golden maze as well as golden keys, a golden compass and short story about a neat little golden animal called ‘Spotty’ with lots of colourful illustrations. 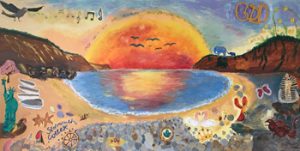 The children at Lady Seawards school in Clyst St George, a school new to Budding Creativity this year, have composed a song linked to the treasure trail adventure in their story as a joint musical and literacy initiative which they plan to perform for parents.

Fans of the Jurassic heroes will be delighted to find the brave and resourceful friends, Peter, Caroline and Eddie appearing in many of the stories with Bud, the engaging and intelligent sheepdog, frequently taking a starring role.
We plan to produce two illustrated books this year containing a selection of poems and stories. One for the primary schools and a second for the secondary schools. As before, each student will receive a copy containing their contribution. The books will then be available for sale in Budleigh.

The Budding Creativity team will select around 30 junior and secondary poems to be printed onto boards which will then be situated around the seafront in Budleigh for the Summer.

We are looking forward to seeing the murals in Budleigh at the beginning of July. Ten murals will be produced this year from Exmouth Community College, Sidmouth College, Millwater School, Maynard School and St Peter’s School, Lympstone.
All the poems and stories and photos of the murals will be uploaded onto the heroes’ website together with the Golden Lion Tamarin song. Have a look for yourself at www.heroesofthejurassiccoast.org

Once again, the Budding Creativity team wishes to thank all the schools involved for their enthusiastic participation. We are grateful for their support and all their creativity. A special thank you to Paul Moger-Taylor, who masterminded the musical and literary collaboration at Lady Seawards school. Debs Austin, the teacher of Rockies class says the children have really enjoyed participating in the project.